Since I returned back home and since my last entry on this blog, I have been in regular contact with the Weligama Police and a couple of local people from Mirissa who know Chandi very well. I have been sickened to the core to have found out more lies by Chandi and more about his criminal history. It is shocking. Please please all tourists have to stay away from this man.

The Officer in Charge of Weligama informed me a couple of days ago that Gayan was married TWICE!!  I mentioned in my last blog entry on this website that he was married to a UK woman who he assaulted and how he was put into jail for that attack in London. Well it turns out that Gayan is also married to a local Sri Lankan woman for the past 5 years. During this time he still had foreign women as girlfriends on the beach with whom he stayed with in their guesthouses.Since last year his local wife hasn't been seen anywhere and police suspect that Gayan has done something to her.

I was also told by a local that he attacked an old Swiss lady and attempted to stab her in the face with a knife.  The police gave me more information about one of his murders he committed with 3 other friends a number of years ago in which the High Court trials are still pending. He attacked an innocent local man in a fight with an arrack bottle-hit him in the head. Then he and his friends stabbed him to death with a shard of glass. I also found out more about the rape case. It turns out Gayan took a local woman into the jungle and gang raped her with up to 20 local men. When I quizzed the Police why someone like Gayan has not yet been convicted for such crimes I was told that the judicial court system in Sri Lanka is antiquated and takes a long time where often criminal cases take up to 10 years to be resolved in the courts.  This has shocked me so much. Had Gayan been convicted of his earlier murders and crimes so many tourist women would have been spared. I urge you to read more about Gayan Chandi in this blog in entries further down this page.

Some notes on the pictures:
If you meet him he will often take you to Parrot Rock and talk about his poor life and how much he wants a baby. He will often do poi to attract women. Upon meeting you he will also take you to his cabana and his parents place to show you how "poor" they are and then immediately try to convince you to live with him in the cabana and start a guesthouse business. He sounds so genuine but its all lies.  He is a well known heroin addict and criminal but the locals are too scared to say anything to foreigners in case he attacks them. Gayan often hangs around the rotti shop near the bridge because this is the place where the buses often drop tourists off. I have shown all of these places in the photos so you are warned and are aware.

If you have any more information about Gayan, please contact me on victimsofcrimeinternational@gmail.com.

I have also contacted the Australian and Sri Lankan authorities. This evil man needs to be stopped.PLEASE READ MORE INFORMATION ABOUT GAYAN/CHANDI BELOW:
Posted by Peena at 3:38 AM No comments: 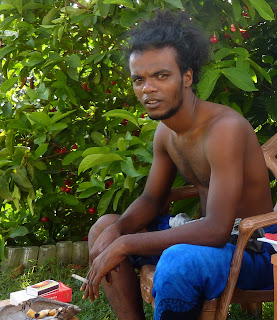 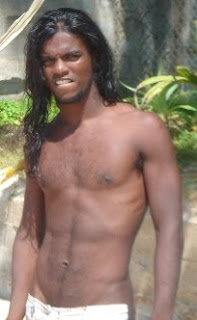 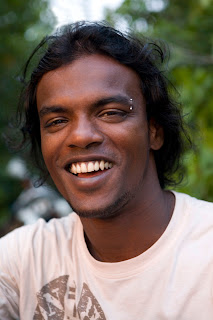 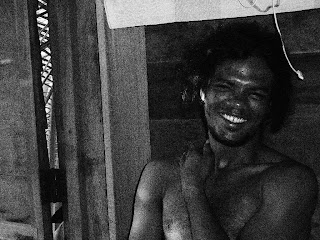 This is a warning to all women who travel to Mirissa Beach on the south coast. There is a local surfer beachboy by the name of Gayan Lakshitha, but most people call him Chandi. He has dark skin, messy dredlocks, a tattoo of his ex girlfriend on the inside of his left forearm, and also an eagle on his right shoulder blade. He lives across from the cemetary near Udapila Junction.

He often hangs out at the beach, especially at Wadiya Resturant because Gayan will tell you he works there. This is not true, the owner Asanka, uses Gayan to lure female tourists into his buisness in order to make money off them.

I spent a month with Gayan in August, he was charming and sweet. This is all an act. He assaulted me one night on Mirissa beach because I wanted to go for a walk. I tried to run away down Galle Road, but he chased me. I had bruises and scratches all over my body. Luckily the next day he was arrested and when I went to speak to the WEligama OIC, he told me all about who Gayan really is. He has pending court cases for murder, gang rape, various assaults, and posession and distribution of heroin. I didn't even know he used smack, that's how good he is at hiding things. I found out from the OIC that he has assaulted many female tourists in the past, but most don't report it.

I fled the country to get away from this mess. But before I left I spoke to him on the phone from prison. He addmitted to shooting someone and justified the gang rape because he said she was a sl%t. The whole experience has been horrifying and I wished someone could have warned me considering his long list of victims. I believe him to be a psychopath, he is extremely good at manipulation and lies and everyone needs to stay away from him and warn others.

And please stay away from Wadiya Resturant, they know that he is a violent criminal and still use him to make money! It's so unsafe. Another guest house who knows his history and uses him to make money and doesn't warn tourists, is Suduweli guesthouse in Kirinda near Yala National Park. Stay away from here also. I stayed there one week with Gayan and the boss Shantha knows all about him and didn't warn me once! They are all as bad as each other, it's disgusting. Suduweli is in the lonelyplanet guide to Sri Lanka.

Please beware of this dangerous criminal, he can do some permanent damage to your life. At the moment he is locked up in Matara Prison, but he could be out at any time.
Posted by Peena at 8:25 PM 2 comments: